After a late night bus breakdown, Lee and I arrived to Cambodia’s capital, Phnom Penh, and took a short night’s rest before awaking to greet my sister at the international airport. The festivities of having Alexis with us for the next three weeks while we traveled through Asia started from the moment we saw her. She arrived to much fanfare, a handmade welcome card, and the sounds of Wilson Phillips (a childhood classic), blasting from our speakers. 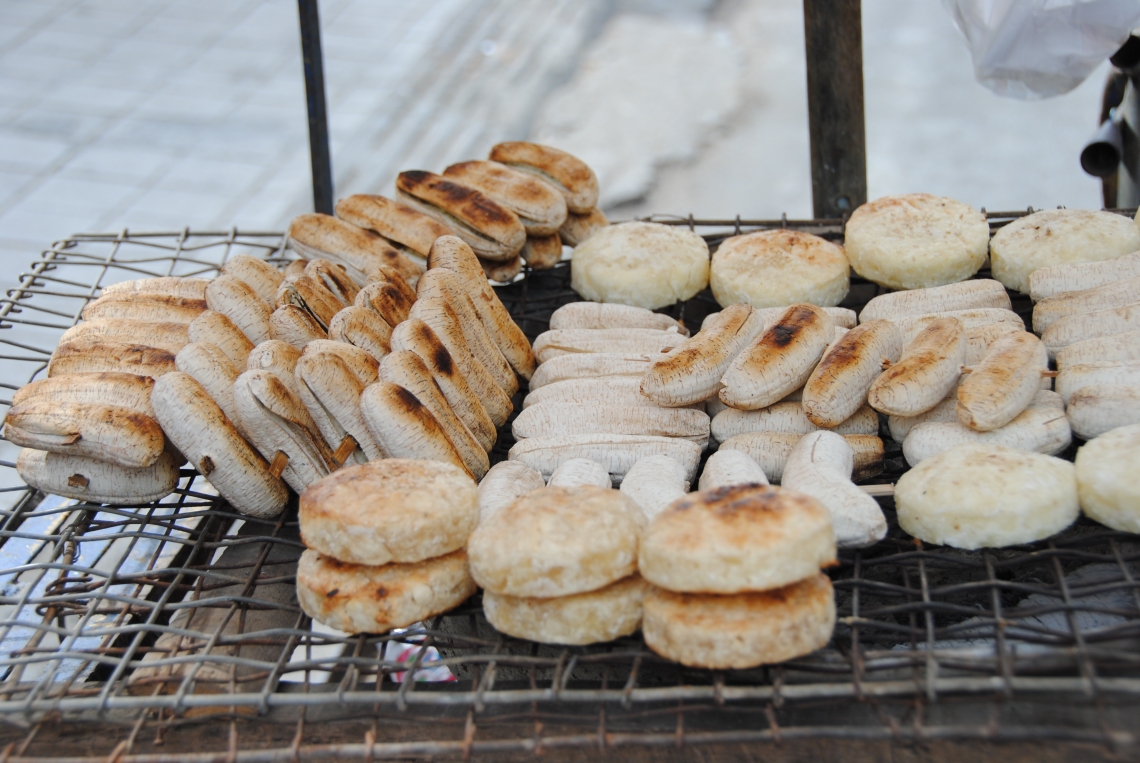 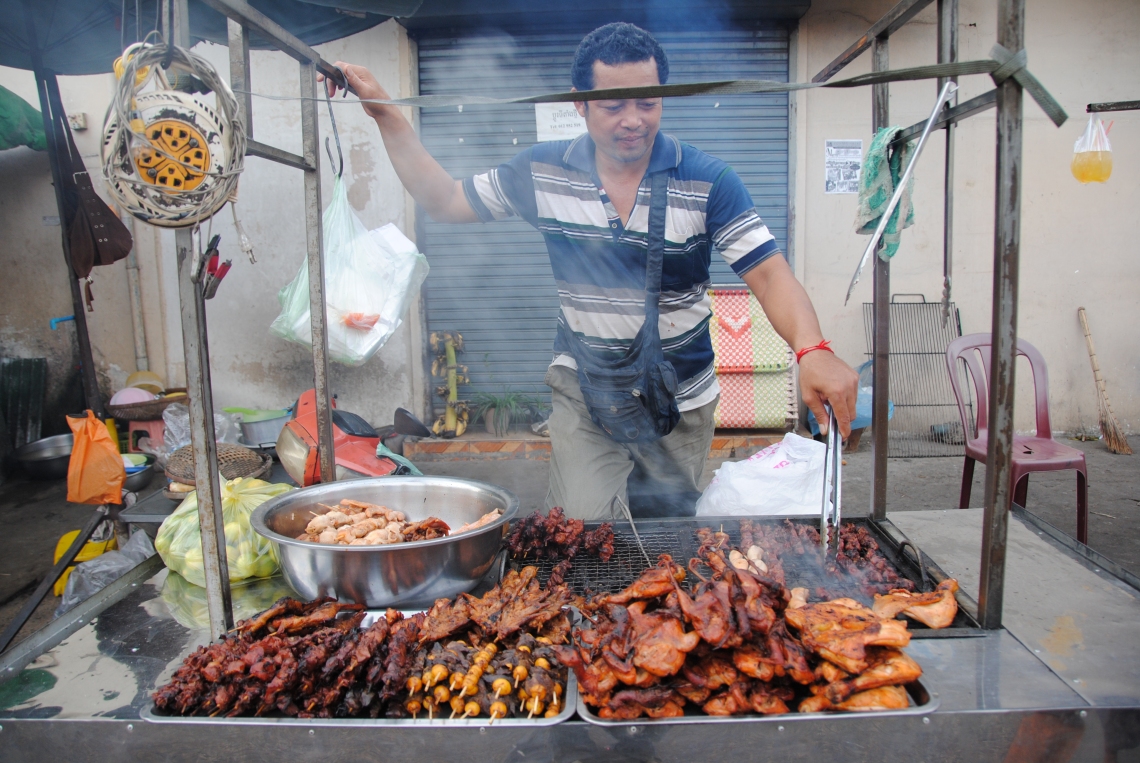 In the city’s central park we were whisked into a free public exercise group, but finding it not quite our speed, we opted for a small yoga session instead. Limbered up and ready to soak in more cultural experiences, we headed to Meta House where there was a small gallery supporting local artists, documentaries played nightly, and a good music scene. The film viewing that night was a documentary on the ex-Cambodian Head of State, Khieu Samphan, and his involvement with the Khmer Rouge. The devastating history of the Khmer Rouge rule in Cambodia from 1975 to 1979 when the nation was forced into backbreaking agrarian work, starved, tortured, and over 1.7 million people murdered is chilling. The Cambodian people are now marching towards a much brighter future while still honoring the victims with museums and monuments throughout the nation. 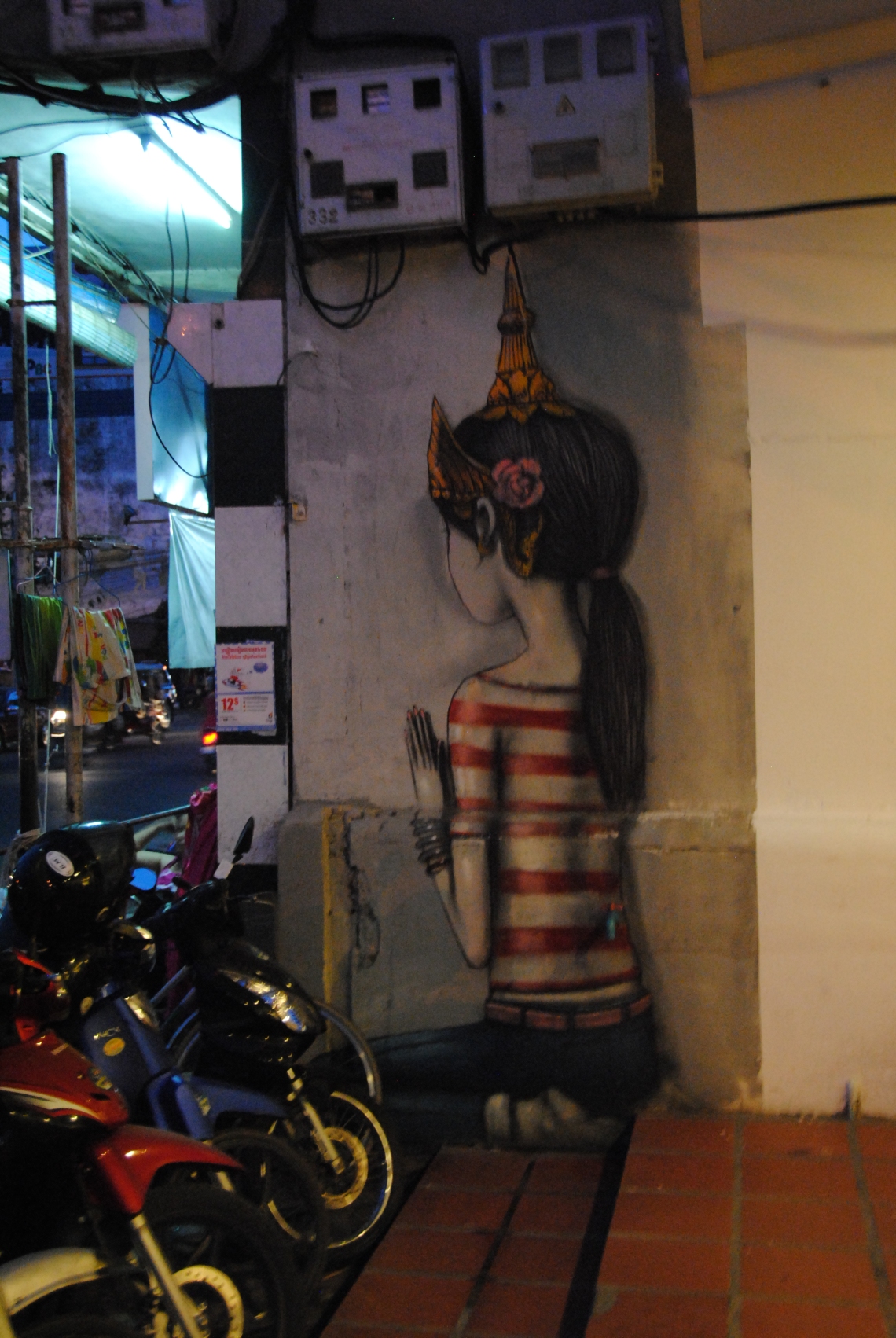 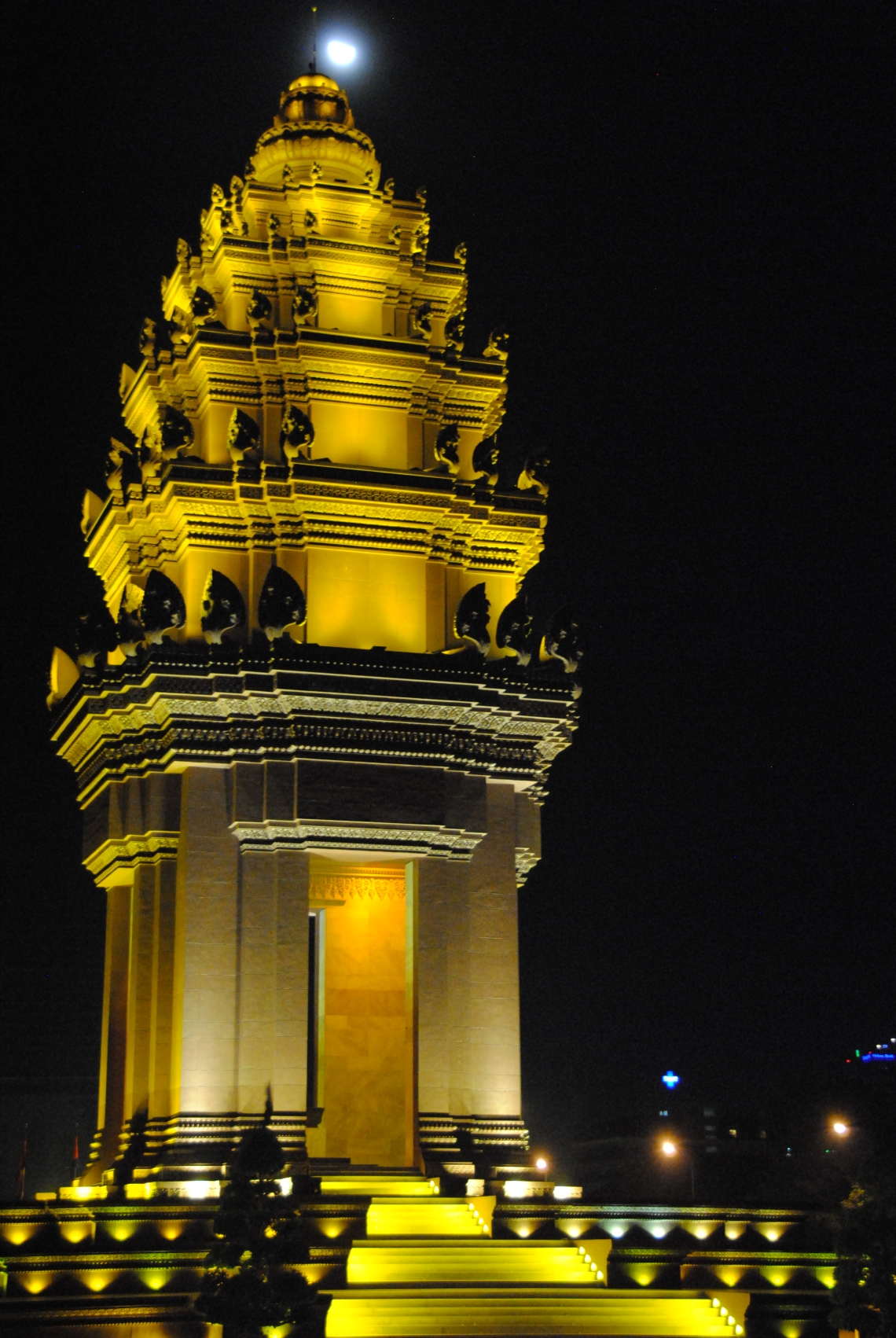 An open country once again, people flood the region to see Angkor, the largest religious complex in the world. Just 20 minutes from Siem Reap in central Cambodia, the ruins are far stretching and include hundreds of temples and shrines. Seeing Angkor Wat was time warping. Five main towers rise triumphantly from their dark aged stone base and give even more weight to the sprawling complex. Built in the 12th century by King Suryavarman, Angkor Wat, meaning City of Temples, was built with sandstone in classical Khmer architectural style. Intricate carvings give dimension to the complex and even the windows support bulbous stone carved pillars. Religious imagery from Hindu epics is everywhere, as are depictions of sacred plants and animals. Before leaving we bought palm juice fresh from a palm tree growing on the temple grounds and sipped the sweet liquid from a straw in its plastic bag. 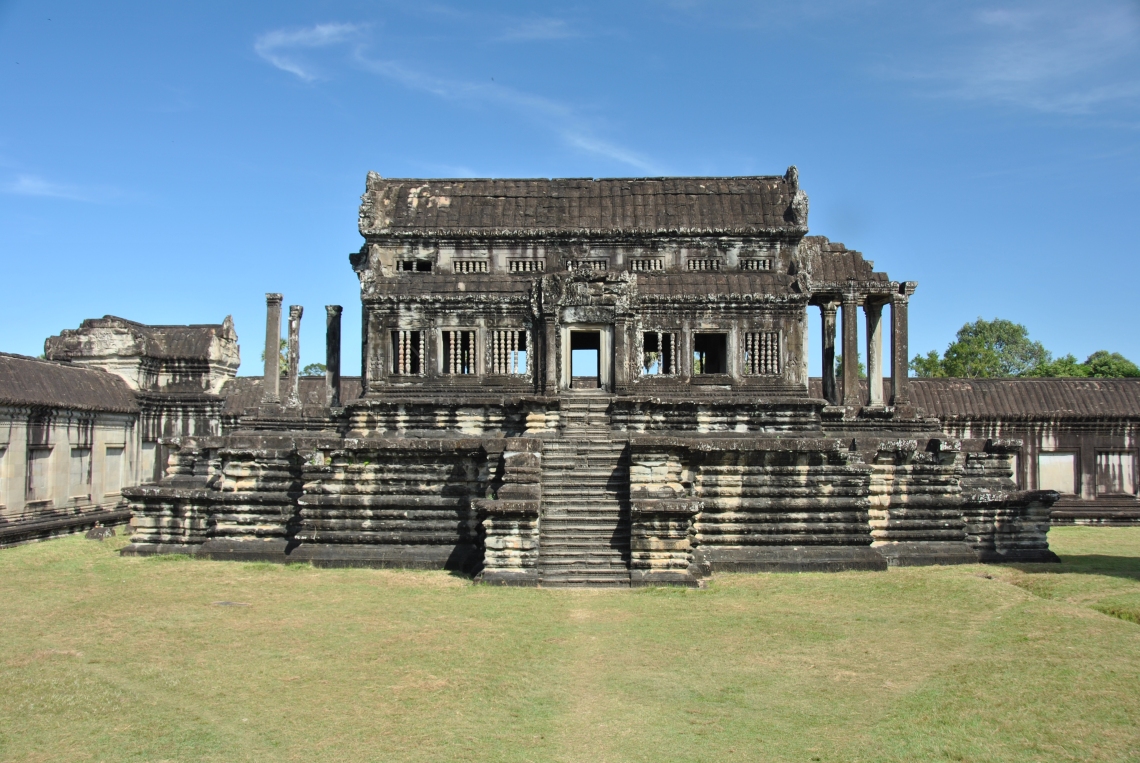 Another five minutes down the road held Angkor Thom and the ancient ruins of Bayon. Bayon was built under the rule of another king in the late 12th century, King Jayavarman VII, and outfitted with over 200 faces depicting his likeness. Each enormous stone face seems heavenly serene and happily peaceful, making it one of my favorite temples. 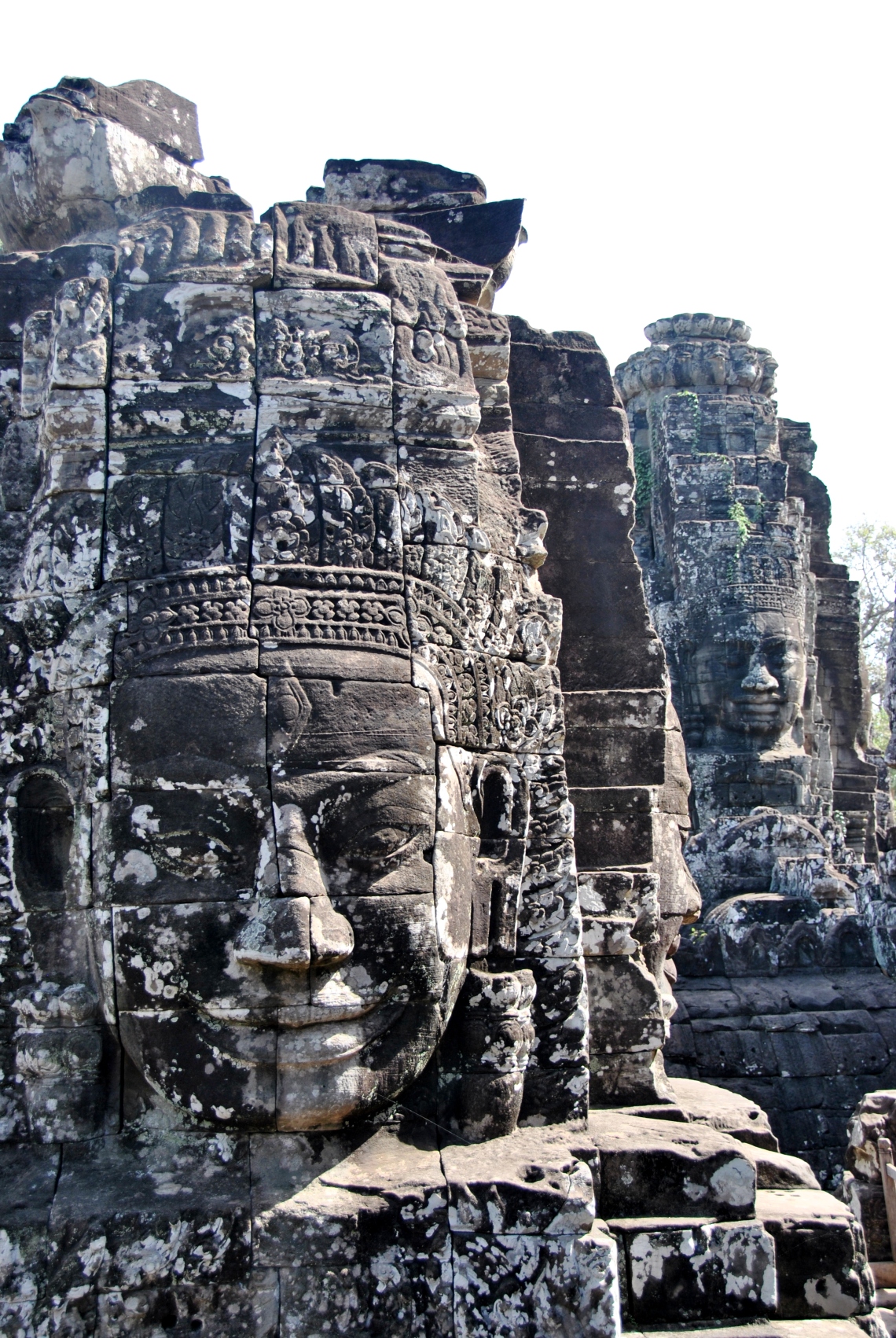 Perhaps most impressive of all was Ta Prohm, where tree roots draped the ancient structures, moss seeped from every crevice, and lichen breathed new life into crumbling walls. The jungle had clearly spoken and claimed its grounds; we were merely obliging visitors. 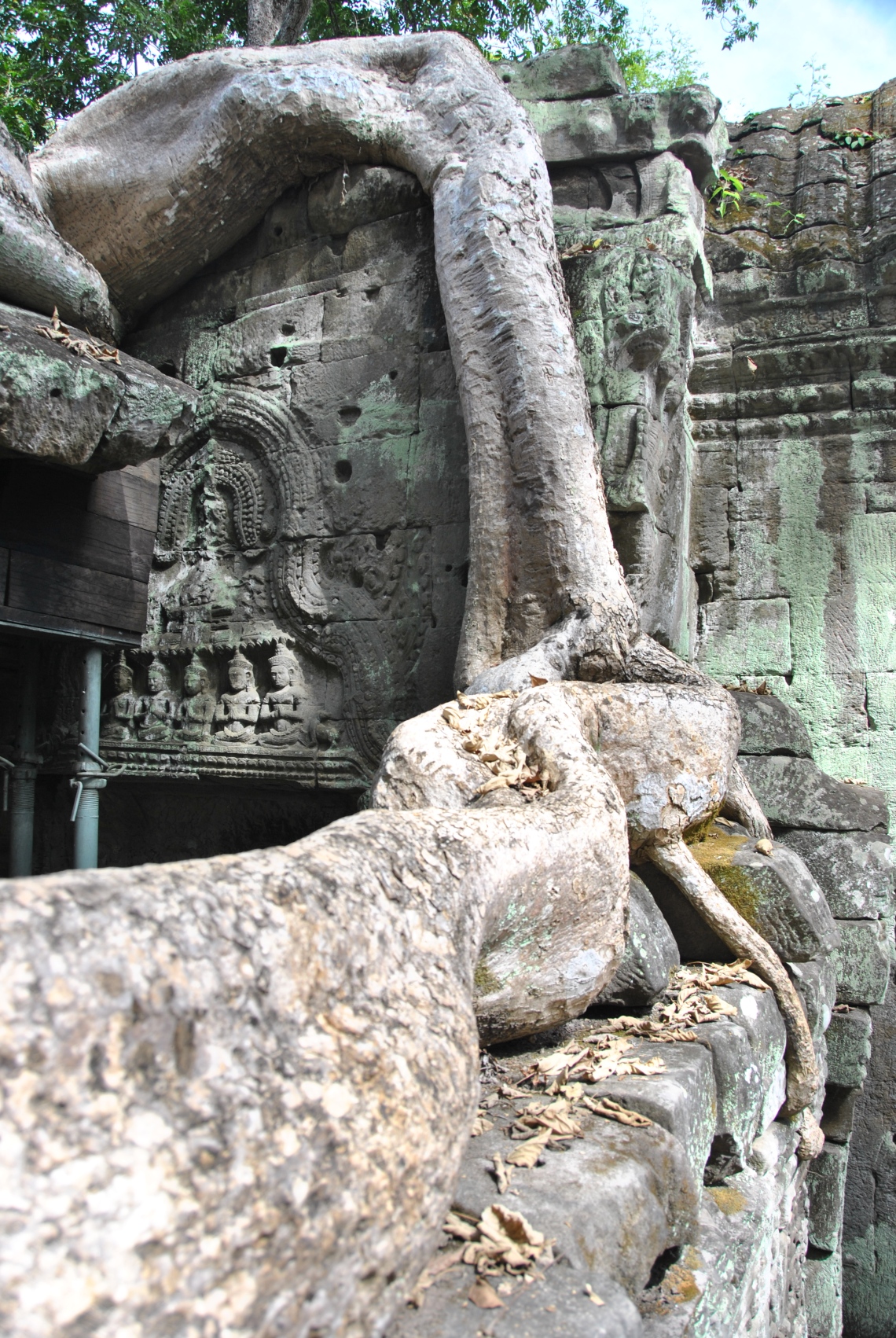 Back in Siem Reap, we lunched in the lap of luxury on beds at an all-white restaurant that delivered scrumptious bites on angular white-washed trays. The cool airy space stood in sharp contrast to the enveloping heat of the jungle and we were happy for the repose. After lunch I spotted a pedicure parlor that specialized in fish pedicures and decided to surprise Lee with a visit to “Dr.Fish”. Telling him we had a surprise for him, we made him close his eyes while we guided him down the street. In front of the big tank of four-inch long fish he opened his eyes and was immediately excited to sit along the bench above the tank and have his feet eaten by hundreds of fish. Alexis and I were less sure as we sat down, hovered our feet over the tank, and the starving fish swarmed our direction. Thankfully, the $3 fish pedicure price included a complimentary beer to calm the nerves! The fish nibbles were much more forceful than I expected and it was nearly impossible to keep my feet in the water for longer than a few seconds as the fish slipped in between toes and the big ones tried to eat my whole toe. Since Lee easily stayed stone still, the fish loved him and ate his dead skin voraciously. Alexis and I went through laughing fits and tried to see who could keep their feet in longer. It was a surprisingly intense 30 minutes, after which we had the softest, cleanest feet of our adult lives.

Worn out from a full day of adventuring, we headed back to our hotel room, glanced out of the window, and discovered that there was a crocodile farm next door. Two pools surrounded by strips of concrete teemed with hundreds of adult crocodiles piled on top of each other lazing in the sun in the middle of the city. 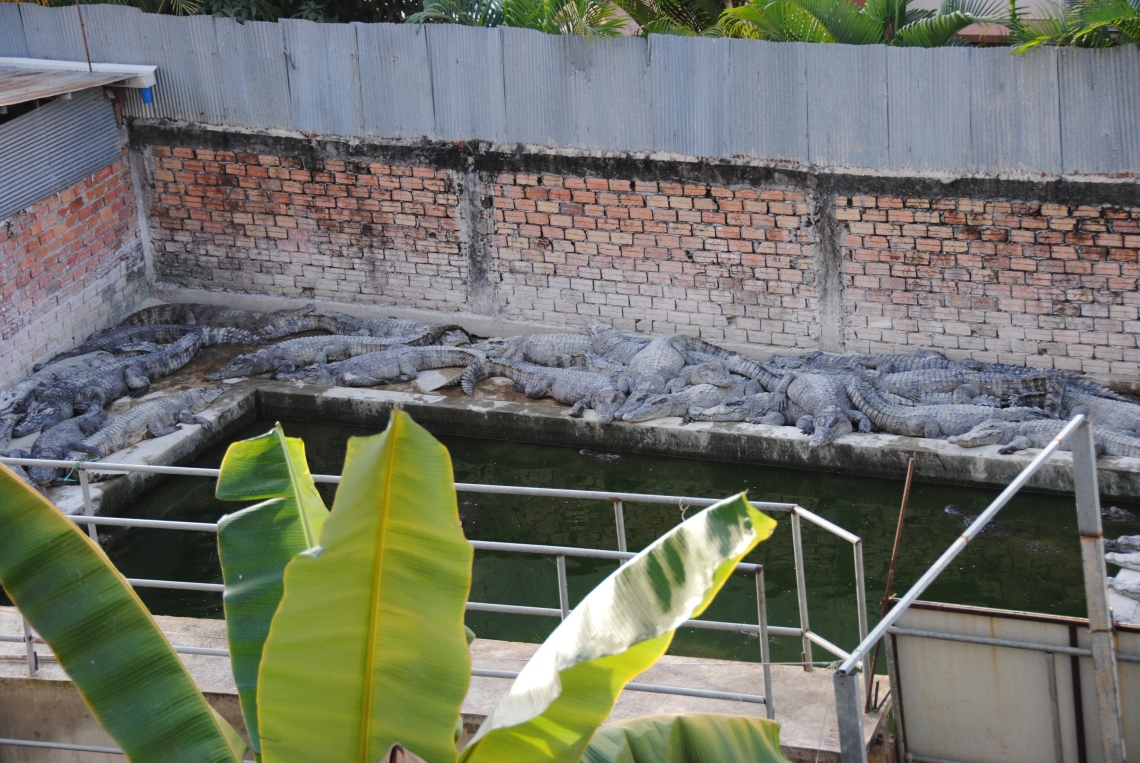 Cambodia held more surprises for us than we expected and we embraced each one with due serendipity.