Ho Chi Minh City, Vietnam delivered its promised big city vibe. Cars, tuk tuks, and motorcycles crowded the streets and neighborhoods sprawled across the map. Four and five people piled on a single motorcycle weaving in and out of traffic. Women sashayed down the streets with sunbrellas, hiding from the sun’s rays at all times. The 5th Ave of Saigon spilled out onto the streets designer names at designer prices. 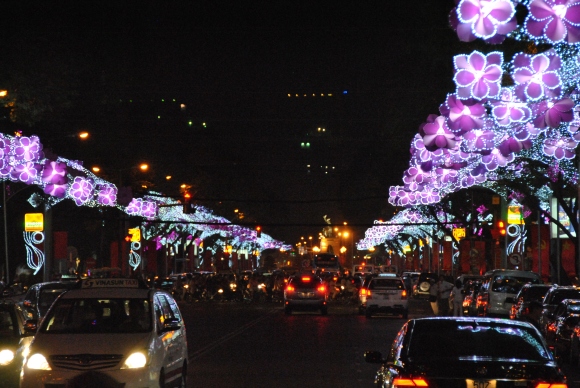 We initiated oursleves with streetside drinks where we sat in child size seats amongst rows and rows of other night owls. The chairs and crowds became so plentiful that we were six deep for five blocks on both sides and two rows were in the actual street, leaving just a small strip for cars and cart vendors selling dried squid and sausages to wheel past. We took in the scene and toasted to the holidays. 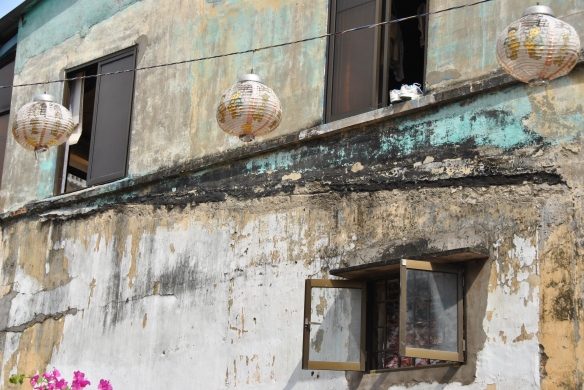 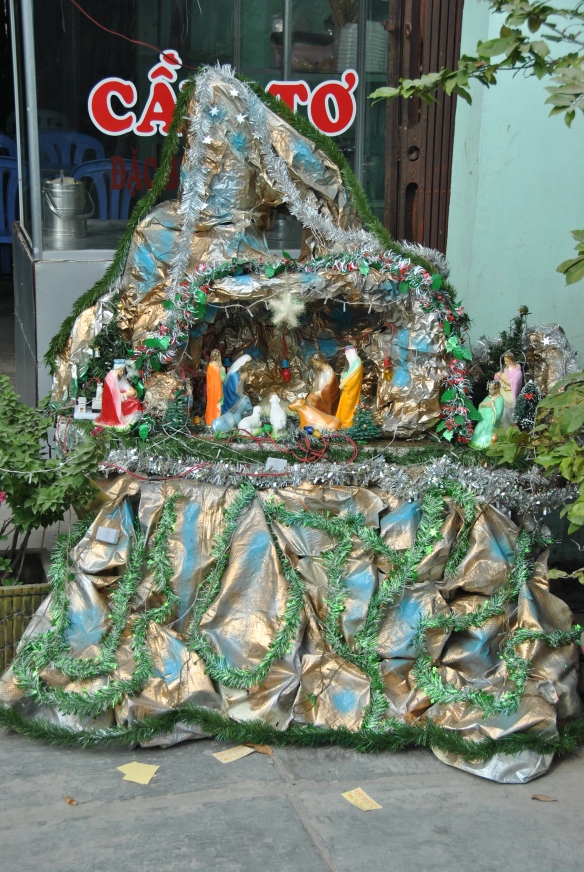 Though we spent Christmas worlds away from home, we managed to continue several big holiday traditions. Lee, Alexis, and I skyped with my parents and brother back home in Connecticut and were virtually transported to their living room, glowing with heat from the fireplace, while my dad read Clement C. Moore’s The Night Before Christmas, as he has every year since he received the book as a small boy. We opened presents thoughtfully selected by Santa’s helpers (aka Mom, Dad, and Nicholas), and decked ourselves out in the ribbons and decorations from the presents. For a bit of local culture, Lee surprised us with a taste of Vietnam’s most exotic fruits. We tried rombutons, languns, mangosteens, and custard apples. We all waivered between loving the mangosteen and the custard apple most and continued the debate by tasting them at every stop along Vietnam’s coast.

While still in the frenetic capital we visited the War Remnants Musuem and paid tribute to the men and women in service across the globe. Wandering the street markets, we stumbled upon a concert in the making. A big star strutted up and down the stage intermittenly singing his heart out and giving cues to the light directors while onlookers snapped his photo. But the real show stoppers that night were the backup dancers who managed to be out of sync for every move and fell into several frustrated meltdowns on stage. With three days to go until the major production went live for New Year’s Eve, we wished them our best. 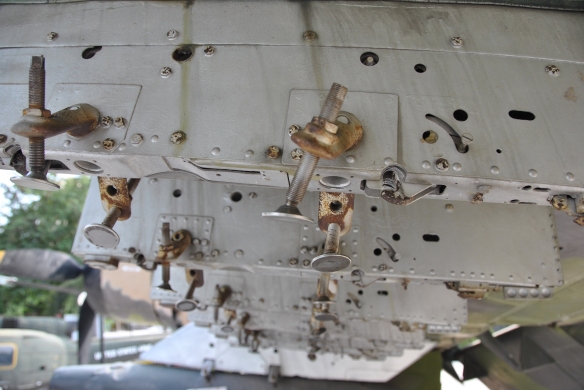 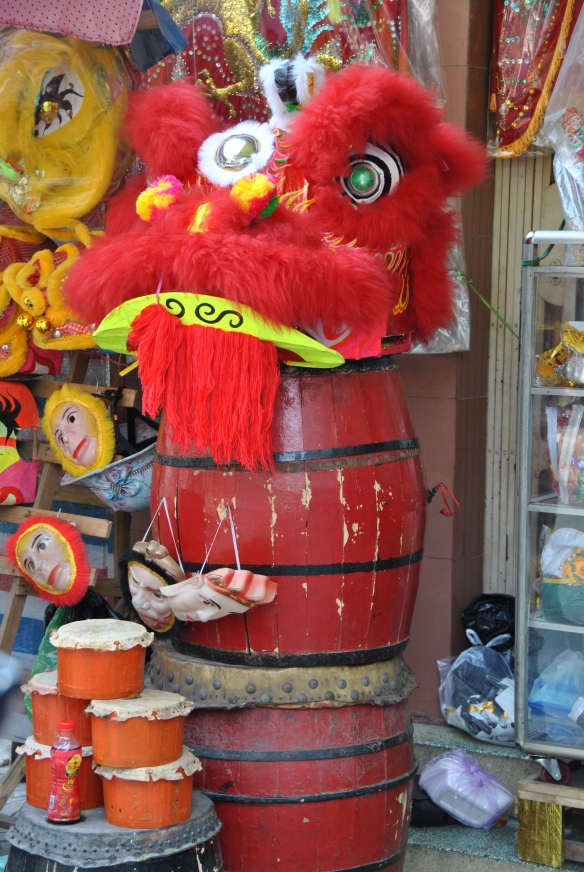 We found a retreat from the busy streets in the heart of pulsating Saigon where several high design restobars shared a garden courtyard. From there we ordered a fancy evening meal and conducted a blind taste test of Saigon’s most favored beers, Saigon Green Label vs. Saigon Red Label. There was no clear victor, but we all agreed that the garden escape was a winner and the perfect place to bid Saigon farewell.

Delightful Hoi An charmed us from the moment we stepped foot on her lantern lit streets. Softly decaying buildings lined each block with their matching butter-yellow facades and hanging wooden bird cages that swayed in the crisp warm breezes. Vietnamese women strolled the riverside markets in their traditional conical bamboo hats and artisans carved Buddha sculptures from locally grown bamboo roots. 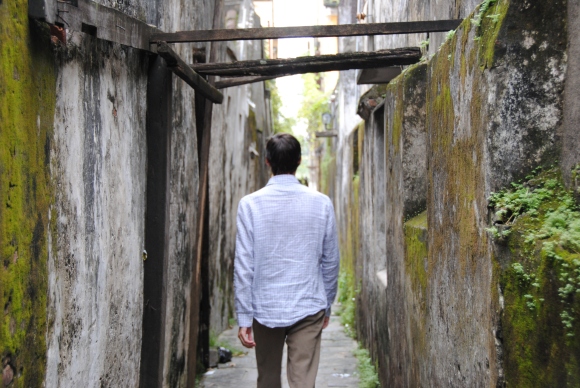 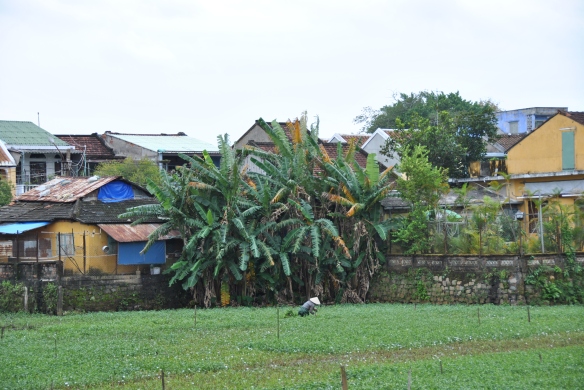 Keen to check out the booming industry of custom made clothes that makes Hoi An a favorite of many a sartorialist, we researched, scouted out, and settled upon our favorite tailor, Yaly Couture. The fun of deciding exactly what clothes in exactly what styles we wanted ensued. Inspired by many designer duds but wanting something original, I set out to sketch my own floor length ballgown. After several dozen iterations, I selected my absolute favorite, brought it to life with watercolors, marked my specific tailoring requests, and handed it over to our slighlty overwhelmed saleswoman. Alexis went through a similar process, selecting a sketch of mine and outlining her must haves. We then picked out our fabrics and patterns, perusing aisle after aisle of silks, chiffons, and cottons in every color and design imaginable. We finally found our perfect matches. After five days and seven fittings, the gowns fit like gloves. (Pictures to be posted as soon as the dresses are worn to a proper occassion!) 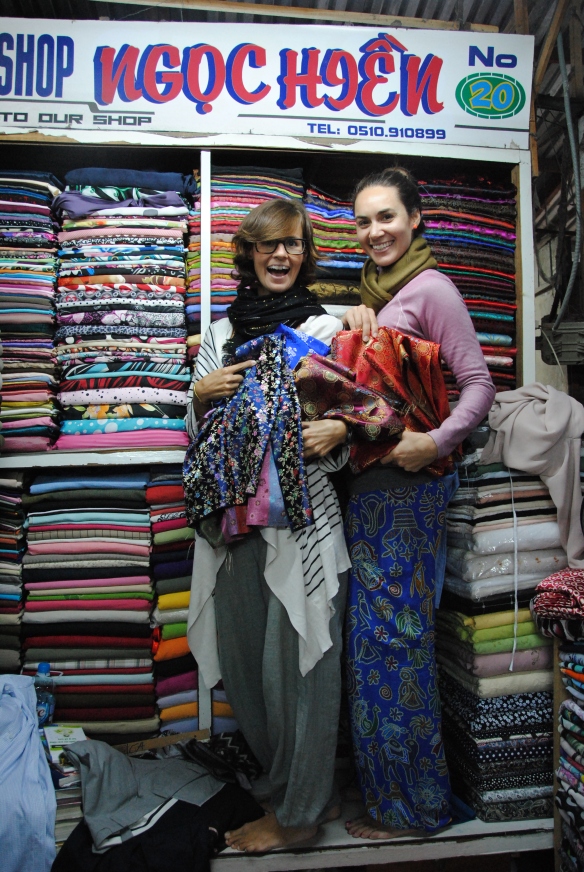 Lee was by no means left out of this extravaganza. In fact, he approached it like a fastidious scientist. He had two suits and two dress shirts made. Sample images were provided for each, and every last detail was noted on a horizontally labeled diagram. Lined inner collar, notched lapel, hand stitching on lapel, double vent, working button cuffs, accent thread color, wild silk patterned liner, surgeon cuffs, embroidered initials, ticket pocket, lipstick pocket, and matching pocket squares. By the time Lee’s clothes were made, tailored, and completed, all the women in the store were swooning over him. He must have set a record for customizations requested. Not to let the fun and games of customwear end too soon, we also each had a pair of shoes made, and even got a few presents for family back home. It certainly wasn’t the typical backpackers’ splurge, but it sure was worth it!

We spent New Years Eve dazzling under the stars at The Secret Garden, a lovely lush hideaway. We listened to live music and discussed New Years resolutions before heading to Q Bar where we met up with new found Aussie friends and danced the night away. Complimentary champagne, chocolate, masks, and plastic instruments were handed out for a midnight toast to ring in the new year. By 4 a.m. when we started home, the streets were beginning to clear and we lit sparklers as a last hoorah before waking up in 2013. What a year it had been! 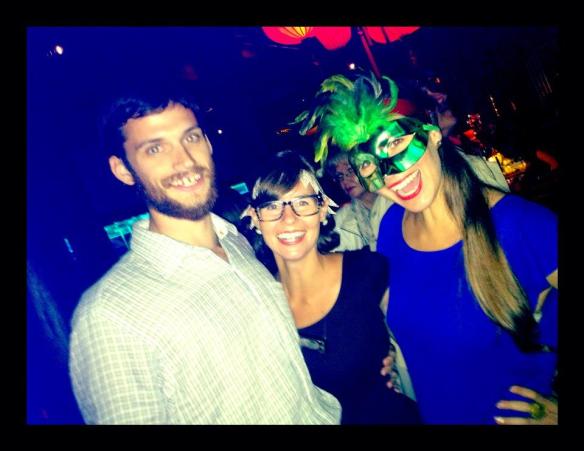 We bid Hoi An goodbye with a scenic half-hour bike ride to the beach along the South China Sea. The sand was warm, the sea was cool, and the banana chocolate chip pancakes hit the spot.

Fourteen hours and a night train ride later and we were in Hanoi, in northern Vietnam. A damp cold permeated the city and a constant drizzle kept us hopping from one indoor activity to the next. Art became our fuel, the gas that kept us going. Every few yards held a promising artist’s shop or high end gallery with hundreds of oil paintings at an eye-poppingly low price. Though many pieces were knock-offs or recreations of other work, for the keen eye, there were beautiful original gems to find; and we each found one. 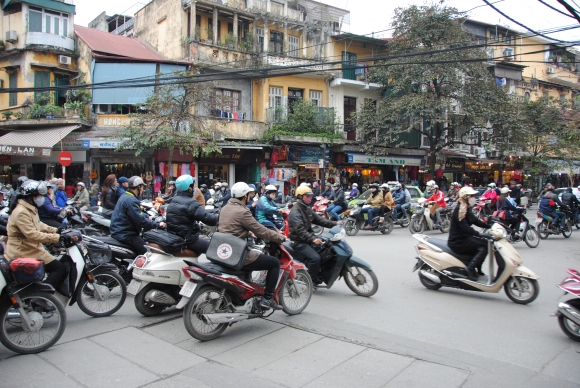 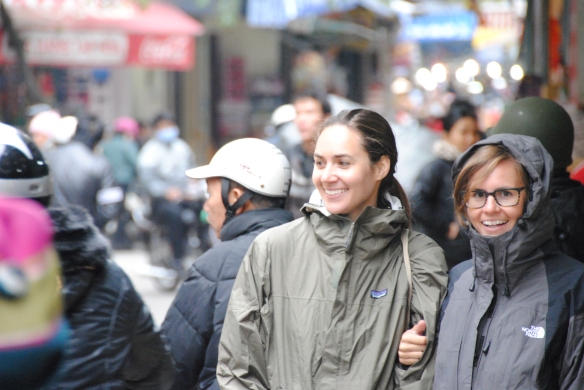 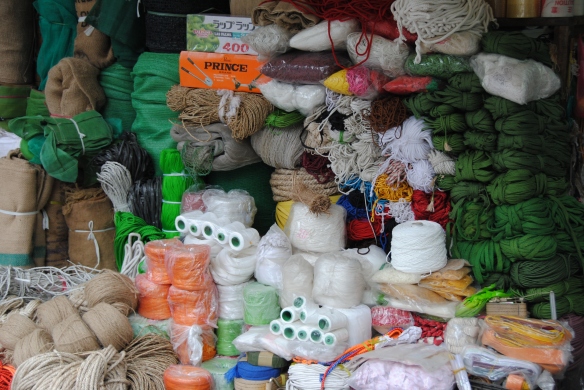 We also went to see the famous water puppet show at Thang Long Puppet Theatre. It depicted many aspects of traditional Vietnamese culture and life and was accompanied by live music. The show was very different from anything I’d seen before, originating from storytelling over the country’s flooded rice paddies in the 11th century as a way to entertain the spirits. Today’s versions of the puppet show use lacquered wooden dolls that move over a waist-deep pool controlled by pupeteers from long poles behind a curtain. Unfortunately, the less-than-coordinated choreography often made the scenes more humorous than serious, but it was an incredible experience nonetheless and one we wouldn’t have wanted to miss.

Serial cafe enthusiasts, we found several spots that warmed our hearts and our toes. From the top floor of one cafe we could see Hoen Kiem Lake, or Lake of the Restored Sword, where it is legend that emporer Le Loi lost his magical sword to a turtle who was reclaiming it for the Golden Turtle God. People still look for large turtles and possible signs of the lost sword in the lake today. Nearby Radio Cafe was tucked behind an art stall and up a creaky sloping set of stairs that led to a closed wooden door. Through the door awaited a true locals’ scene with kids intermittenly starting impromptu acoustic jam sessions while others gossipped over their tea and coffee sweetened with condensed milk. We returned several times for their divine custard apple shakes and were happily surprised each time that the acoustic sessions were in full swing. 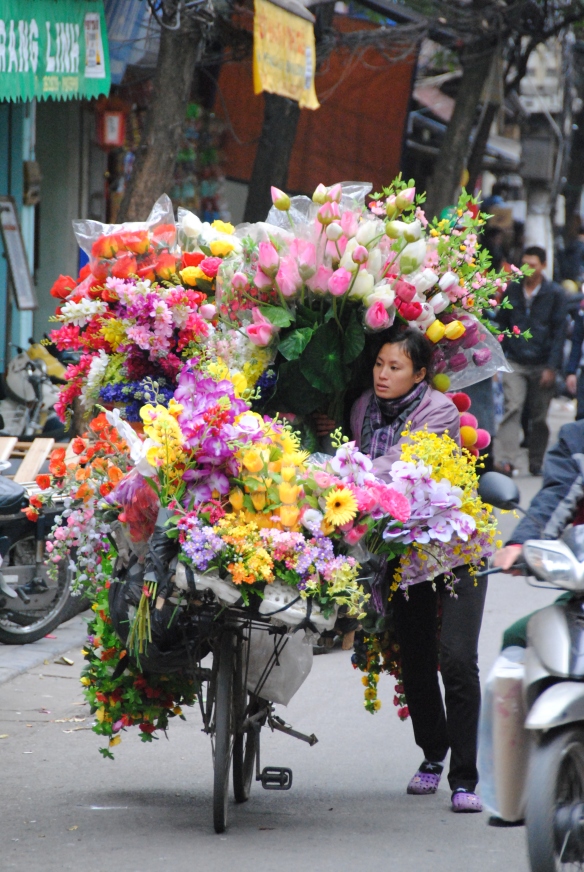 Departing the city for a day, we went on an excursion through Halong Bay. The bay itself sits in the Tonkun Gulf of the South China Sea and consists of over 2,000 islands and karsts, along with several native floating communities. It is estimated that the karsts have evolved over 20 million years in the wet tropical climate. The day we visited, the air was chilled but we were fortunate to have clear skies. Karsts defiantly rose from the frigid waters and provided dramatic cliff views for miles.

After lunch on the boat, we came upon a small floating village where children wore winter jackets and hats while learning in open floating classrooms. We hopped on a small row boat with one of the locals and ducked as we passed through a stalagtite tunnel into a milky green lagoon colored with eons of calcium carbonate dissolving into the sea from the limestone karsts. Halong Bay, or Bay of the Descending Dragons is said to have been formed with the help of a family of dragons who descended to protect the area from invaders. The dragons spit jewels and jade which then turned into all of the islands dotting the bay which kept warring ships from entering. Wrapped in the lore of it all, we certainly saw dragons formed in the surrounding stone. Walking through an immense set of caves further into the bay, we were asked to use our imagination to see turtles, jelly fish, rabbits, goats, Buddha, and even Romeo + Juliet in the stalagtites and stalagmites. 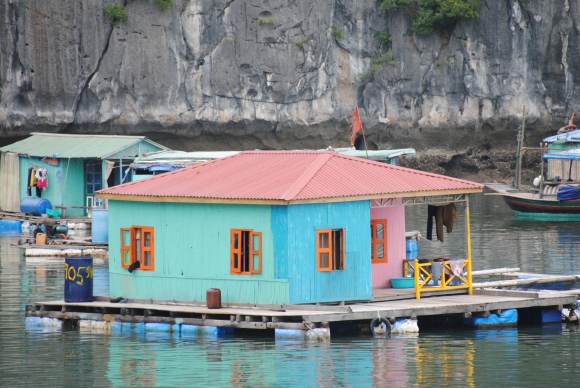 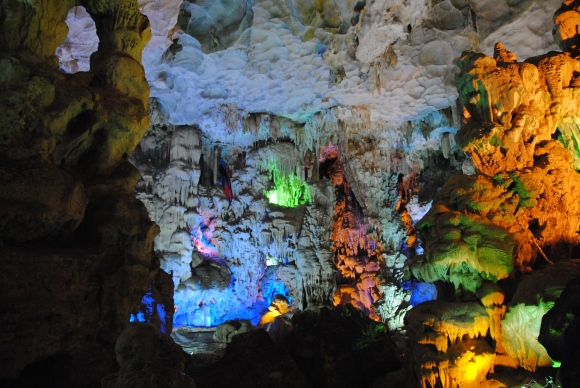 As a birthday present to Alexis on our last day in Hanoi, we took a cooking class at one of the most revered places in the city, Old Hanoi. Along with our chef teacher and two cooking class mates, we went to the chef’s favorite produce market and bought fresh herbs, vegetables, and rice paper. We were told the market was not government regulated and the quality of meat could not be guaranteed so we did not buy beef, chicken, or shrimp for our dishes there. I was quite glad too, because organs were splayed out in every direction dripping blood onto the floor and one woman was using a flat blade razor to shave the hair off her pig’s feet while flies swarmed above. Once back in the restaurant, we began making sauces and dips for our various dishes. After hand rolling our own shrimp spring rolls, we used small parafin burners to cook lime leaf chicken kebabs and caramel pork braised in clay pots. We finished off our meal with sweet potato pudding. The food was the best we had in all of Vietnam and we even got the recipes to bring home. It was a delicious end to a phenomenal journey with Alexis. I know so many memories will come flooding back once we make these dishes in our own kitchens.

Oh my goodness gracious! So many wonderful memories jam packed in this post! What about the locals only flea market where you couldn’t buy anything in Hanoi? Being in Vietnam with you two was so special – thank you again!!

Lee – you caught the money shot in Halong Bay with the open flying flag! Bravo!

What a divine read! This post was so colorful it took my breathe away with the beauty and vibrancy of Southeast Asia; you absolutely captured the living soul of everything. So happy to see my daughters sharing a lifetime of experiences, with Lee adding off the beaten trail adventures into the mix! Awesome! Love forevermore, Mamacita

Your photography captures the country every where you go. I’m amazed at the bicycle flower vendor and the mobile meat market. The colors are brilliant. Lee you got a good deal on that suit. I don’t think I could have done so many pockets! Can’t wait to inspect it!