Volunteering on an organic herbal medicine farm brought us to the small village of Nagarkot, an hour and a half east of Kathmandu. There, we lived with a Nepalese brother and sister who opened up their land, kitchen, and home to us. All the hills in the region are terraced, with hundreds of shelves of rice and vegetables, each about 4 feet above the last. We camped in our tent on the highest terrace of our hosts’ land, and each morning woke to a stunning view of the Lang Tang Himalayan Mountain Range in the distance.
While on the farm, we carved into the Himalayas to build a set of steps connecting several terraces, built a fire pit to keep warm and enjoy company at night, and ate lots and lots of dal bhat (rice with lentils). Dal bhat is a staple in the Nepalese diet, they often it eat three times a day and enjoy sharing the popular saying, “Dal Bhat Power 24 Hour”. 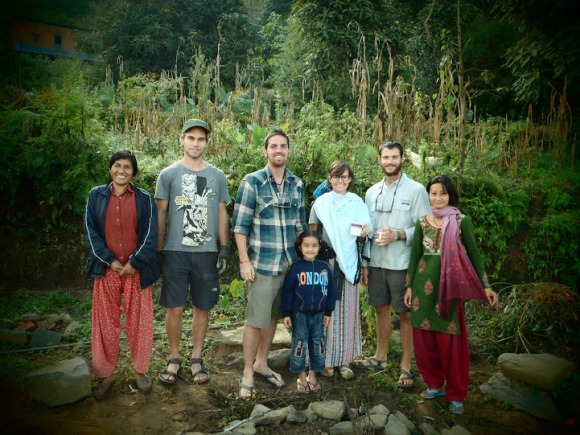 I also celebrated my birthday on the farm in what was one of the simplest and most dreamy birthdays I have had yet. In addition to waking up to a crystal clear mountain view, which was slightly thereafter consumed by the day’s clouds, I carried cinder blocks up the newly formed stairs to the building site of another cottage, and sandpapered and painted the frame of a building. When the work was complete, Lee, Richard (the other farm volunteer, who graduated from LSU of all places!), and I hiked through the clouds to the city in search of birthday cake. We didn’t find any cake, but bought a box of moon pies, had some tea, and walked back down the winding dirt paths to the farm. On our way we past many a water buffalo, goat, chicken, and duck – people do not generally tie up or fence in their animals, so they are free to roam. Nepalis don’t make too much of a fuss over birthdays (though the younger generations are starting to), so we had the standard dal bhat for supper and our hosts went to bed. Lee then busted out the 6-pack of moon pies, Tuborg beer we bought in town, and the local sour Chang beer we bought at the neighbor’s house for 30 cents to fill up our liter bottle (you always bring your own container for the Chang seller to fill up with the liquid from fermented rice or wheat known as Chang). Lee then placed the only light in town, the candle that lit our small dinner table, on top of the box of moon pies declaring it a full birthday cake and he and Richard sang me a boisterous Happy Birthday! After making a wish and blowing out the candle, we stumbled around for a few minutes in the dark trying to find a dry match to re-light the candle and then dug into our moon pie birthday cakes. It was a day to remember!

:I greet the divine inside of you. This pervasive and heart felt saying is a constant reminder of the kind and generous spirit of the Nepalese people. They are all smiles and open hearts as they welcome you with reverence, hands pressed skyward and a warm “Namaste”.

Kathmandu was clustered, dusty, dirty, and perfectly majestic. It is like no other place I have ever been. The streets are a mix between dirt roads and thinly paved cement; with ditches, trash, piles of rocks, and running sewage lining them on either side. There is little to no order in the traffic so motorbikes, mini buses, cars and people all vie for the same space. Crossing the road is like frogger come to life, with the added benefit of constant honking, smog, and the major unpredictability of those around you driving heavy machinery.

Walking through Thamel, the main tourist district of Kathmandu, was sensory overload our first day as the in your face hyper-consumerism took hold while we tried to avoid being hit by drivers and still see all the sights. Men and women offer you everything from handmade wool sweaters to brass “singing bowls” to tiger balm and trekking adventures. But amidst all of the chaos is a beauty and harmony that is unparalleled. Hindus and Buddhists live side by side, melding lifestyles, religions, and even temples into a seamless open and happy community.

After adjusting to the altitude, Lee and I went on a walking tour of the temples in and around the Thamel district and were awed by the sheer number and density of them. While some were 50 feet high, others stood just 12 inches tall but were adorned just as heavily nonetheless. Marigolds dripped from many of the carvings and popped out against the dark wood and stone as the peoples’ daily offerings to the gods. We had to keep our eyes peeled because the most unassuming pathway or crossing would contain yet another temple. One shrine we found was to the Tooth God, and people would attach coin money to the gnarled old wooden carving in hopes of getting rid of a bad toothache. All of the dentists were also located in this area for good luck. 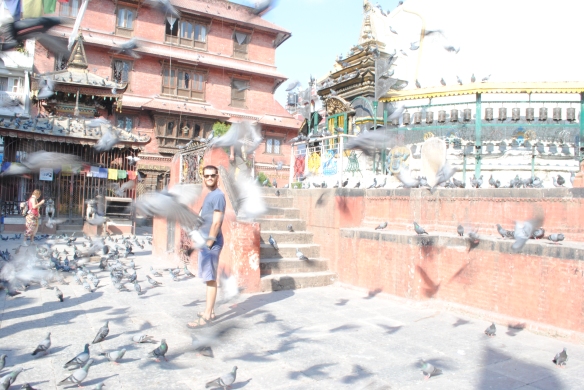 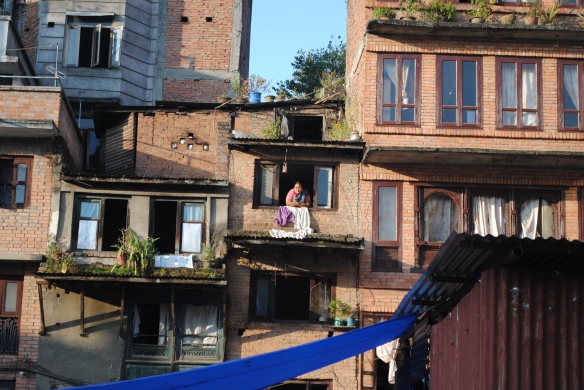 For several hours we discovered temple after temple and explored many of the tiny alleyways and courtyards of Kathmandu. At about 5:00pm, we saw a swarm of people and were swallowed up by the crowd moving closer and closer to a band just ahead with a dancing dragon. We had arrived during festival time and followed the parade further down to the main Durbar Square where the whole of the city was standing on and around Maju Deval’s triple-roofed temple and the surrounding temples. After people watching and getting a glimpse of statues that are only revealed 1-2 days a year, we headed back to the relative “calm” of the Thamel streets. There, pig heads sat decapitated with defiant mohawks, rickshaws skipped down the road with their painted backs and embroidered cloth windows flapping in the wind, and table after table lie chockful of mini gods and bronze bracelets and hemp. 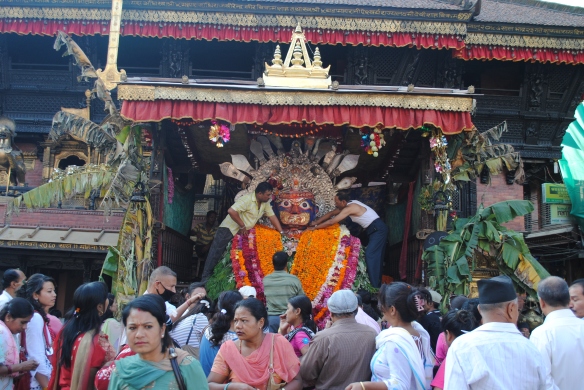 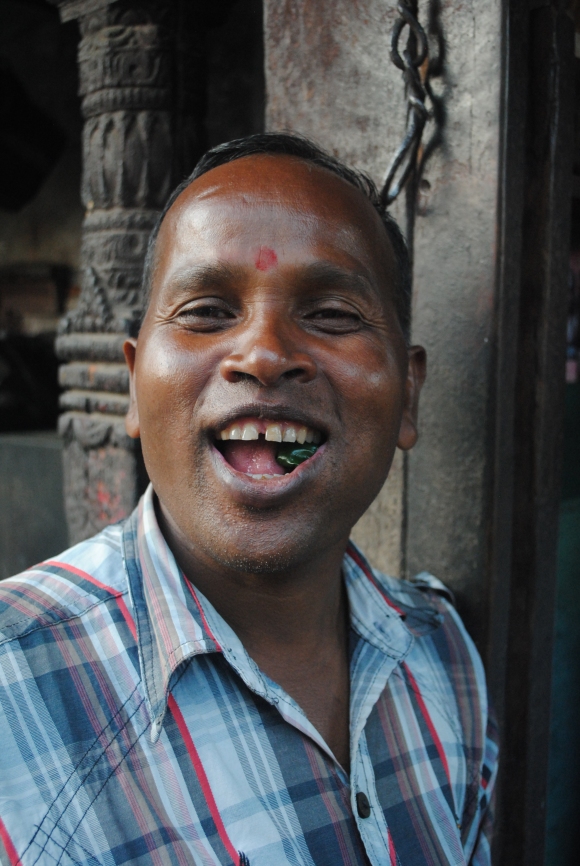 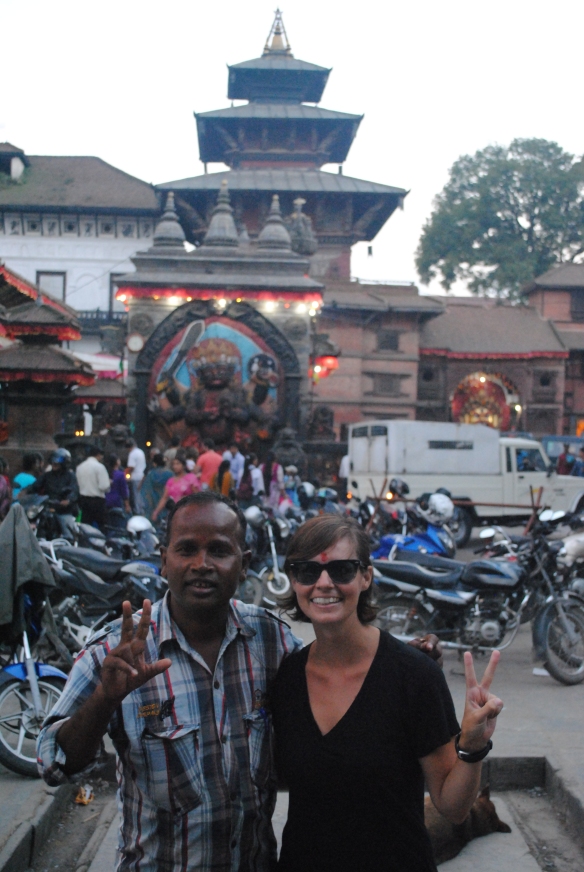 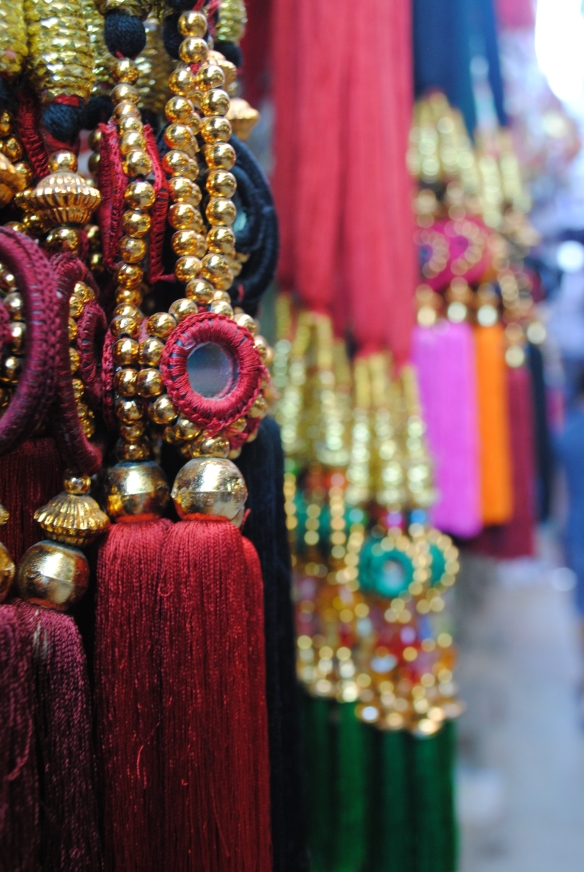 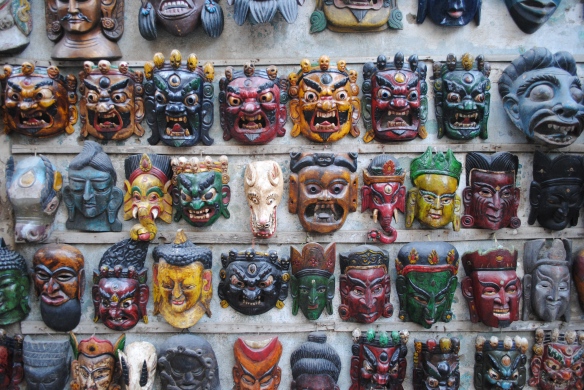 For several days we took in the sights and sounds of Kathmandu and were sure to test out all of the new cuisine. The momos, which are little fried or steamed dumplings with your choice of vegetable, chicken, or water buffalo filling, were my favorite by far! We also tried many noodle, soup, and dal bhat (rice with lentils) dishes. Thanks to a dear friend, Maureen, from home, we were also able to connect with a Nepalese friend of hers and enjoyed an excellent lunch of home grown vegetables and fruit in our local friend’s home. Many thanks for sharing your garden, food and culture with us Tara and BP! 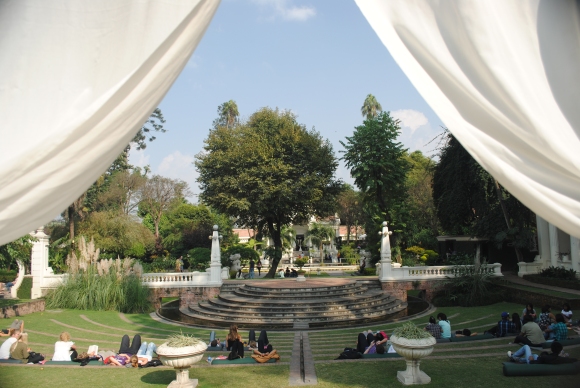 At night, we climbed to the top terrace of our hostel and we could see all of Kathmandu surrounding us. Since power is occasionally cut to portions of the city for “load sharing”, we could see whole areas go black at the flip of a switch. Most of the city closed by 10pm, but glowing in the distance like a magical apparition sat Swayambhunath – The Monkey Temple – which emanated a golden light through the smog and fog. It stood so magnificently high atop a hill in the distance that it felt as though we were staring at a Disney movie set. The very next day we set out to see Swayambhunath up close and were just as taken by its presence. The 365 stairs you must climb to get to the actual temple are all lined with monkeys frolicking and playing amongst smaller statues and stupas. They pick through the offerings of marigolds and rice, eating their choice of the goods, and asking for hand outs when a promising looking friend comes by. The area around the temple is more forested than the rest of the city, so we were able to sit and watch the monkeys run about a small field and swing through the trees, playing and getting in trouble just like children. Once we reached the top of Swayambhunath, the large white domed stupa with Buddha’s eyes etched over gold stood knowingly overlooking Kathmandu valley. The eyes are painted on all four sides of the gold top and represent wisdom and compassion, while the dome beneath represents the whole world. Prayer flags flapped in the wind from the precipice of the stupa and a red skirt floated just above the eyes bringing movement and life to the statue. We took a full clockwise walk around the entire stupa, and spun every prayer wheel. We then sat and watched the life and rituals as people came to one of Nepal’s oldest and most sacred sites. As night fell, candle lighting began and the monkeys starting chasing each other to all ends of the temple with loud screeches and warnings. An elderly man began to clean the small circular dishes beneath each of the prayer wheels where people had left candle offerings earlier in the day and after several minutes spent shining an individual dish, the bronze was glowing and ready for another day. We took our cue to head home and floated down the steps in total darkness to the sound of the holy monkeys. 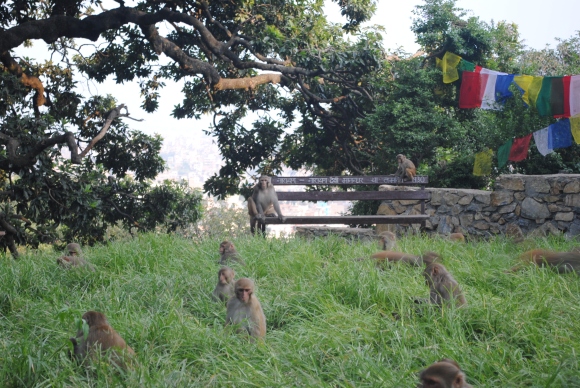 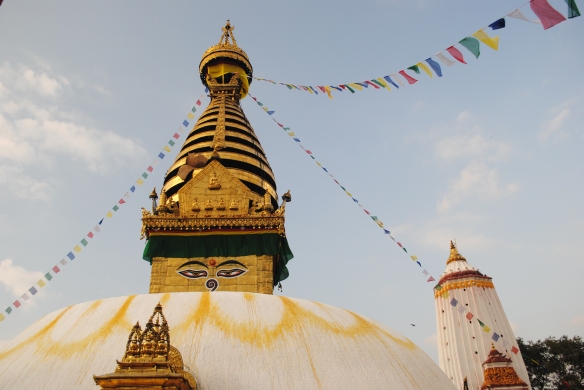