On our journey to discover elephants, we spent several days in Luang Prabang, Laos. Wedged between two rivers, the quaint town held towering temples and discreet courtyards where monks gathered to talk of the day’s activities. Bamboo bridges provided creaking pathways to the hill towns on the other side of the river and plenty of hikes kept our days filled.

At night the slow-paced hum of the day was replaced by a bustling marketplace that stretched across the full width of the streets. Local handicrafts covered every inch of the ground and scarves hung from the tubing of every pop-up tent. Buffet tables layered with food lined the alleyways and for $1, we ate our fill of as many noodles and vegetables as we could fit on one plate. 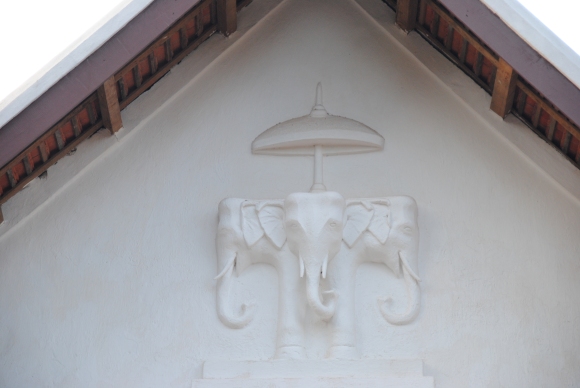 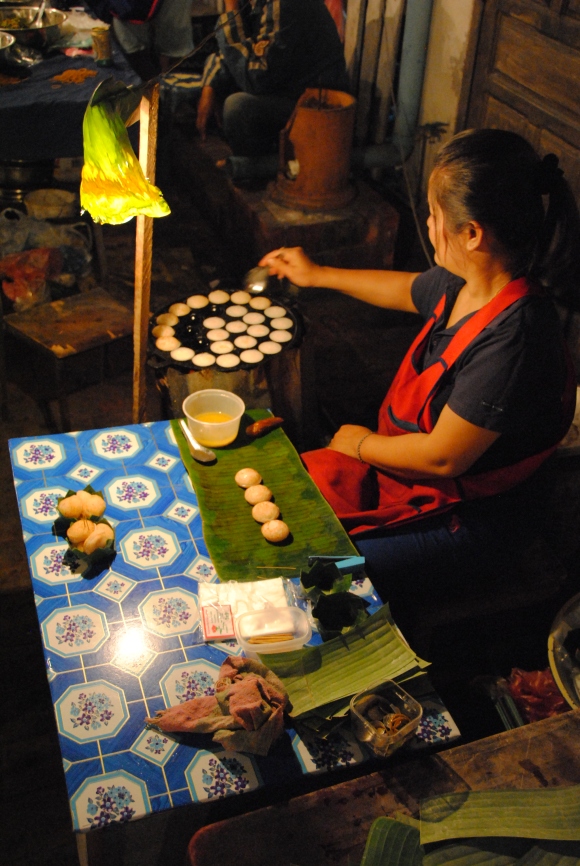 In homage to the city’s French heritage, we decided to have a full fledged “French Day”. I wore my most frenchie outfit and we of course had to start the day with a French kiss! We rented Parisian-chic bikes and peddled around the city admiring the beautiful French architecture that dots the city. While stopped along the Mekong, a legitimate French woman mistook me for a national and told me “Bonjour!” My elated smile noticeably broadened hers. We then headed to a French-owned cafe and ordered a French baguette with proper cheese and a glass of French wine. From our sidewalk seats we penned postcards and decided to forego the obligatory black coffee and cigarettes. At night we watched a film and ended the day just the way we started it. 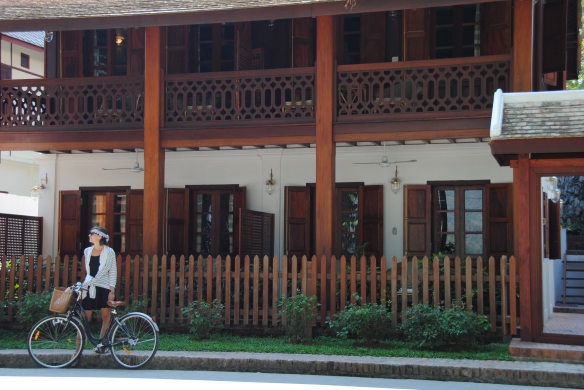 The next morning we left for the elephant populated district of Sayaboury because from my earliest childhood memories, there were always beloved elephants. African art in the form of elephants grazed my living room walls, Babar the French children’s story about an elephant ignited my imagination, and my dad’s own experience of reverence with elephants while on an African safari all instilled a love for the four ton creatures within me.

I knew I wanted to meet an elephant in person, but it wasn’t until I started looking into my options in Asia that I became aware of how poorly elephants are treated at the hands of far too many humans. Even when used for what people think of as “light” work in the tourism industry, elephants are often abused and mistreated. Most are chained to trees with little to no range of movement when they are not working, are fed on a small portion of the food they need to thrive, forced to carry heavy bamboo tourist seats on the hump of their back, and are not well taken care of if/when they get sick.

Disgusted and obviously not wanting to perpetuate this type of behavior, we sought out the Elephant Conservation Center in northwestern Laos, which acts as a sanctuary for these elephants. The elephants at the center follow a daily routine that emulates their natural life while including enrichment programs that strengthen their minds, bodies, and connections to their human counterparts, the mahouts.  The center even has a breeding program. Mahouts, or trainers, across the country are encouraged to bring their elephants to the breeding grounds, upon which the center will house the mahout, pay them a monthly salary to make up for lost wages they would be making elsewhere, and provide a hand tractor to the mahout’s family so they are able to have another source of work and income while their elephant is away. This is an important effort as it is estimated that there are only 1,000 elephants remaining in Laos; and the population is currently dwindling with four times more deaths per year than births. To care for the elephants, the center also has a hospital on site with two full time veterinarians.

Lee and I decided that we would volunteer for 6 days at the Elephant Conservation Center for an even more meaningful experience. We arrived by boat via Nam Tien Lake and glimpsed our first elephant standing at the edge of the hillside, munching greenery amongst bamboo huts. It felt as though we were entering an idyllic version of Jurassic Park. 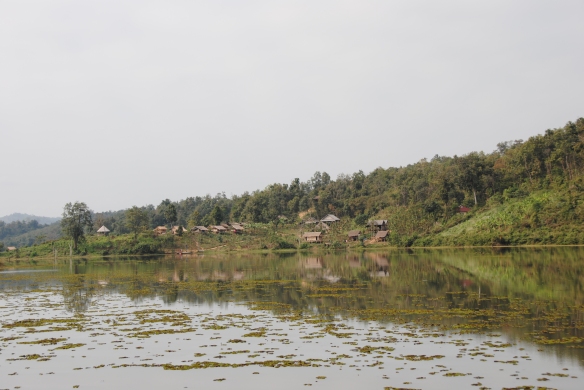 Just as soon as we arrived, we were acquainted with the elephants and their mahouts. The mahouts did not speak English, but it was clear to us that the elephants understood their every request as they made introductions. After learning the basic rules of working with elephants (do not stand directly in front of one as they may not see you due to their wide spread eyes, do not stand too close behind one as they may hit you with their tail, and do not approach one quickly as they may run in fear), we learned how to climb on and off of the gentle giants. Seated on the elephants’ necks, we were swept through the surrounding jungle. The elephants’ ears overlapped and protected our bare legs from the tall brush while we pet their rough heads and took in the powerful views around us. 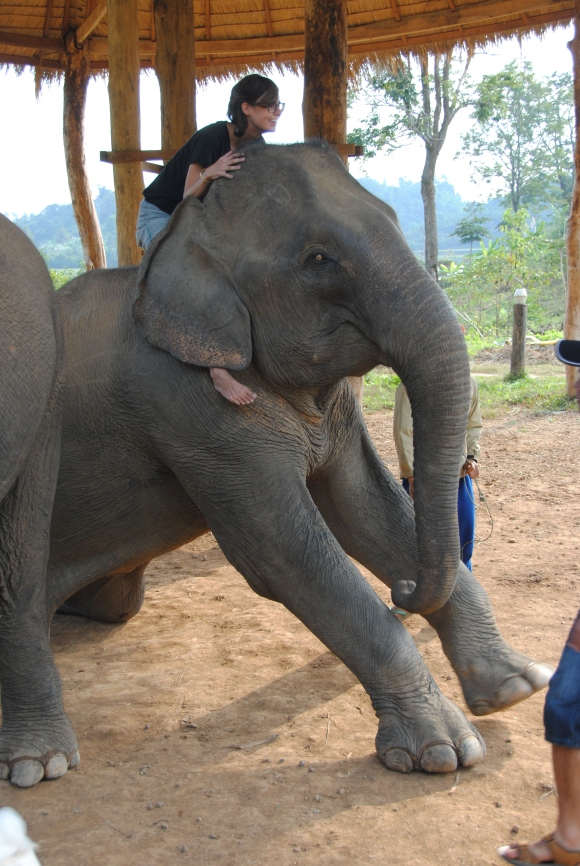 The elephants’ slow pace was ideal for appreciating every moment. When they stopped at a particularly alluring tree for an impromptu snack, we watched in awe at their dexterity. With their trunk, the elephant would yank a branch free of its tree, and then with the help of its feet, would peel the plant into manageable pieces before selecting the juiciest bit to eat first.

Because the elephants would eat all of the edible plants in any one area by morning, we dropped them off at a different resting spot each night. Morning time meant exercise and baths, so after the elephants’ hike back to the center each morning, they took a bath in the lake with their mahouts while we watched and scrubbed the elephants clean from the dock. 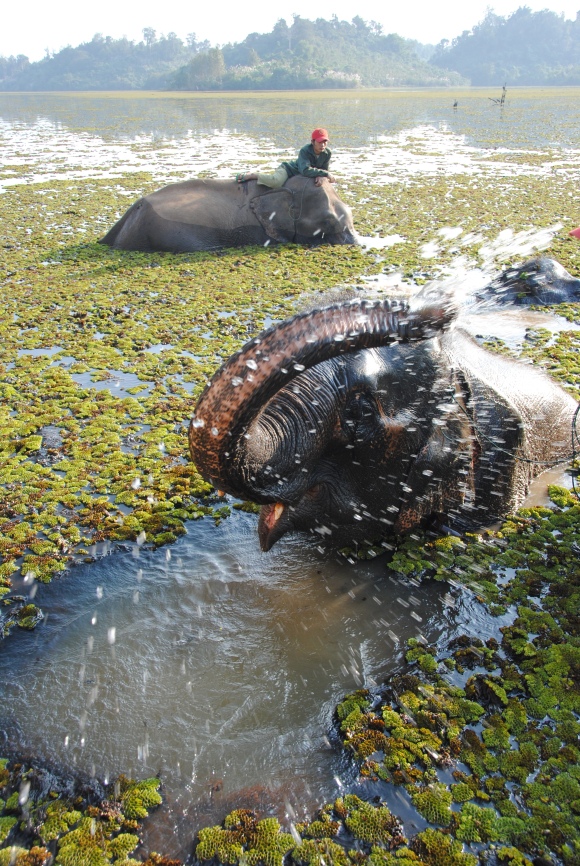 After several days of initiation, we started to recognize the unique personalities of each elephant and how he or she acted in different situations. We also learned the Laos commands and were able to communicate with the elephants directly.

The elephant I worked with most, Mae Comeun, had golden eyes and a high arching back. The tallest of all of the elephants at the center, she also possessed a unique gracefulness. She loved bath time and would submerge herself completely, peaking above the water with just a sparkling eye and spray of her trunk. Lee’s elephant, Tonkun, had majestic, long tusks and was ever ready to learn and please, always following his mahout’s directions. 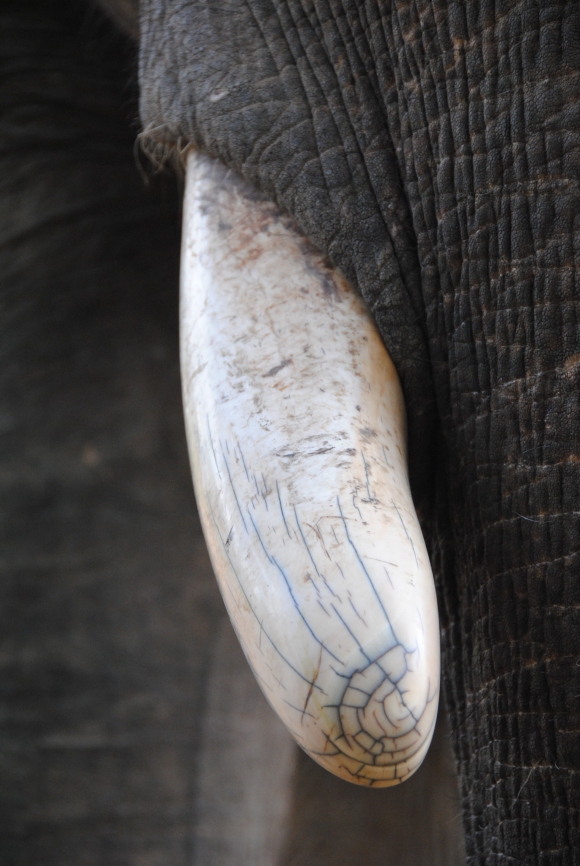 We formed close bonds with the staff in the center too. Alongside them we cleaned the breeding grounds, shovelled elephant dung, and cleared around an electric fence with a machete. We made a garden fertilized with freshly collected elephant dung and then planted it with long beans, cucumbers, broccoli rabe, squash, and rocket. 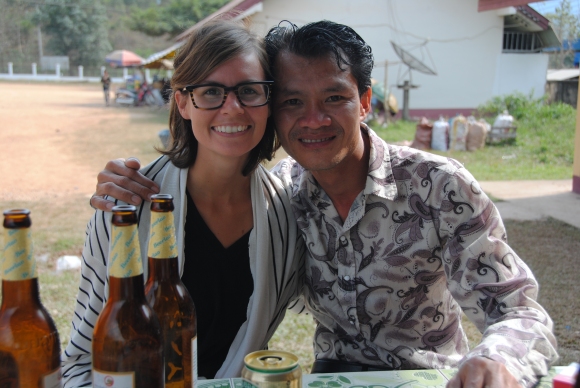 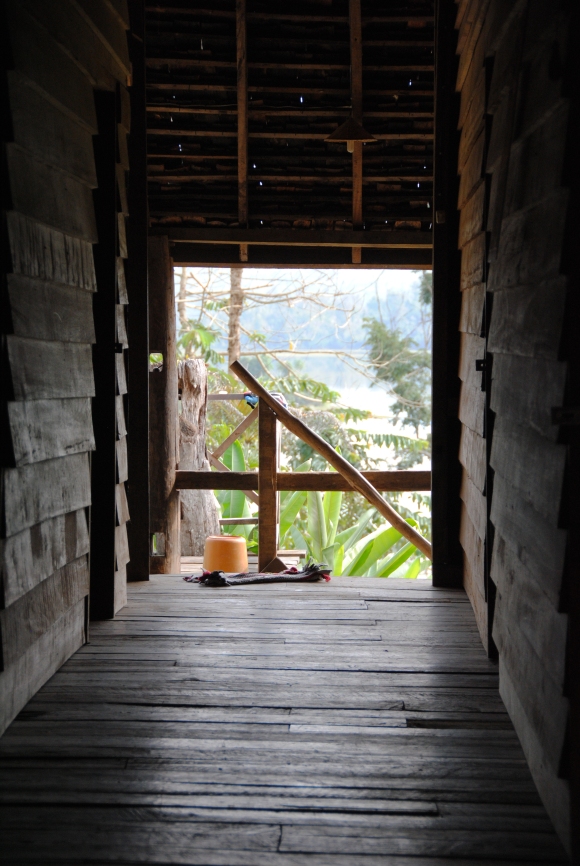 Lee was even invited to go on a bamboo rat hunt, the bounty of which is considered a delicacy by Laos city folk and a staple item by very rural communities. After several hours of digging holes in the ground through the bamboo rats’ tunnels, Lee and fellow hunter Ung came home blistered and empty handed. But several of the other mahouts had also gone into the jungle on a search and brought back two bamboo rats to share. The fuzzy guinea pig look-alikes arrived back to camp alive but were soon singed hairless, chopped to pieces, and tossed into a soup broth. We watched, drank homemade lao-lao rice whiskey, and had expressive translated conversations with the mahouts, thanks to Mr. Sac, our awesome guide.

Thirty minutes later we sat down to a meal of bamboo rat stew around a single pot on the floor of the mahouts’ wooden porch with one spoon shared amongst the 12 of us. It was delicious, mainly due to the strong lemongrass flavouring, but I could have done without all of the bones and feet. Lee showed his usual hearty appreciation and from then on the mahouts regarded him with a noble warrior status.

By the end of our six day stay, we had broken down language divisions with people whose intentions could only be felt, and formed bonds with animals seventy five times our size. This ability for humans and animals to connect across all cultures, borders, and barriers, is something we hope to carry with us for a long time.

7 replies on “Speaking with Elephants”

Awesome adventure among many adventures! Love you little sister and Lee 🙂

What a successful completion to your elephant dream! your two elephants sounds like they matched up with your personalities. Does this make Laos your new favorite country so far??

Lee – I can picture the entire scene where you dressed up as an elephant and (hopefully) did an elephant dance! 🙂

Very moving tale of your bonding with the elephants! Memories and photos that reflect your incredible journey!!! Love, Mamacita

I have been anxiously awaiting this post. I saw a picture on Facebook and could hardly wait to read of your experience. So envious and so glad that you had 6 whole days with these gentle giants!

Dominique! This is so amazing! The coolest experience ever!

You would have LOVED it! So up your alley, next big trip of yours??