Experiencing India for the first time via Delhi was a mix of intense emotions. Immediately upon arrival we were submerged into a pace and way of life that was far beyond what wild images we had concocted when reading and listening to stories about India. People oozed from every corner, moving with the ease of jelly fish floating through calm waters, while outsiders haphazardly bashed against endless shoulders and hips, trying to find an inch of room to move forward. After finding the prepaid taxi stand outside of the airport, we climbed into a slick yet rattling black and white tuk-tuk and forged our way through traffic on the three-wheeled open air taxi. We arrived in Pahar Ganj, where we would sleep in a reasonably priced hotel, just as the sun was setting and had already seen more traffic, heard more honking, and smelled more foulness in 5 minutes than you would in a New York hour.

Using this neighborhood as our base, we set out to see the sights of Delhi. After battling the initial shock of having to avoid human feces and urine covering the streets and sidewalks, we reached the impressive Red Fort. The Mughal emperors lived in this palace in the 17th century and the grandiosity of the structure paired with its jarringly burnt red facade certainly seemed fit for a ruling empire.

Deeper into the streets of Old Delhi we found alleyway after alleyway of categorically divided markets. Each market held its own tunnel of stalls and stores that were covered from above by a ragtag of scarves and tarps that added to the intrigue of the space. Walking through the garment market, pinks and yellows and blues and greens of all shades glistened with embroidered mirrors and beads and sparkling threads. Men sat cross-legged on top of their fabrics, with the most ornate and in-fashion saaris hung from above creating the entrance and walls to their shops. In the very next alley was the gold market where brilliantly yellow gold shone from every window. Intricately worked earrings, necklaces, bracelets, and anklets lay on red velvet begging to be tried on by the throngs that passed. After taking in all the eye candy, our senses turned to the scent of cardamom wafting from the alleyside food stalls. We followed our noses (and the largest crowd) to an enormous sunken cast iron skillet and ordered the same dish that all the locals were eating – puri chole. I stood back from the heat of the cooking oil as it nearly bubbled over and puffed each round dough ball into an airy pocket of fried dough, completing the “puri” portion of the dish. The “chole”, or chickpea stew, was then added to the plate and we dove into conversation with our neighbor while we scooped puri chole into our mouths by the handful.

After several more days of sight seeing and becoming street wise to the myriad of scams and overpriced services that became a constant drum of background noise, we hopped a sleeper train to Agra. The trains, especially in the cheaper compartments like sleeper, bring you scenes as if from a dream. The basic worn benches stacked two high are filled with as many people as space could possibly allow and even more people climb from bunk to bunk across the aisles above you. Booming nasally voices call “chai” holding the “i” for several beats so you always know when the men with their silver canisters and whisper thin plastic cups are about to arrive with authentic spicy milk chai tea for 10 cents a cup. Spiritual women pass through offering blessings and tika, a fine colored paste worn on the forehead, to those interested and willing to pay. Various fix-it men peruse the aisles for a broken zipper here or torn bag there, clinking with the weight of their utilitarian remedies swinging at their sides. Children sneak under legs to swipe clean the floors in hopes for a small tip, and people afflicted with polio silently ask for charity with outstretched palms and withered limbs. Food and drink trays are periodically paraded through and at every station stop locally cooked foods are sold through the trains’ barred windows. Emerging from such a train ride, we felt we had a slightly stronger grasp on Indian culture and the nation’s collective conscious.

We then stepped into Agra, home of the Taj Mahal. Rising before the crack of dawn, we walked through the sleeping streets to see the Taj Mahal at sunrise. Pictures nor words can do it justice. 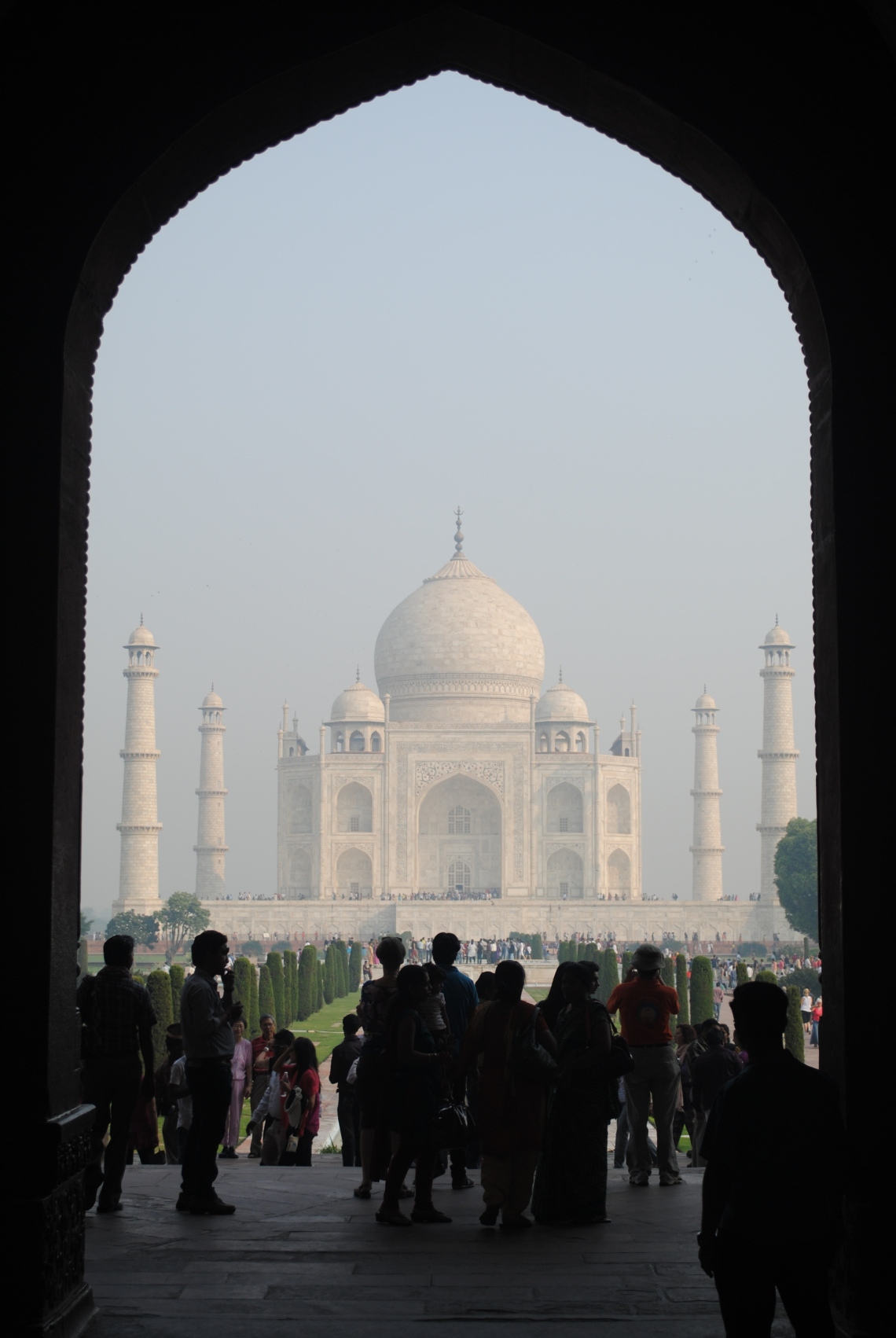 It was erected by Emperor Shah Jahan for his wife Mumtaz Mahal who died giving birth to their 14th child, and was meant as a testimony of his love for her. Built over 21 years, from 1632 to 1653, the compound consists of four grand arching entrances, a mosque, several guest houses, sprawling gardens, and the mausoleum itself. The Mughal architecture is accented with precious stones expertly selected and inlaid to form intricate geometrical and floral motifs on the exterior of all the structures. The archways are also punctuated with artistically applied passages from the Qur’an. Walking the manicured lawns along the reflecting pools leading to the Taj Mahal put us in awe of the stunningly beautiful structure. It was the most gorgeous building I have ever seen, its beauty ethereal and intangible except for in its presence. Needless to say, that did not keep us from taking heaps of photographs! 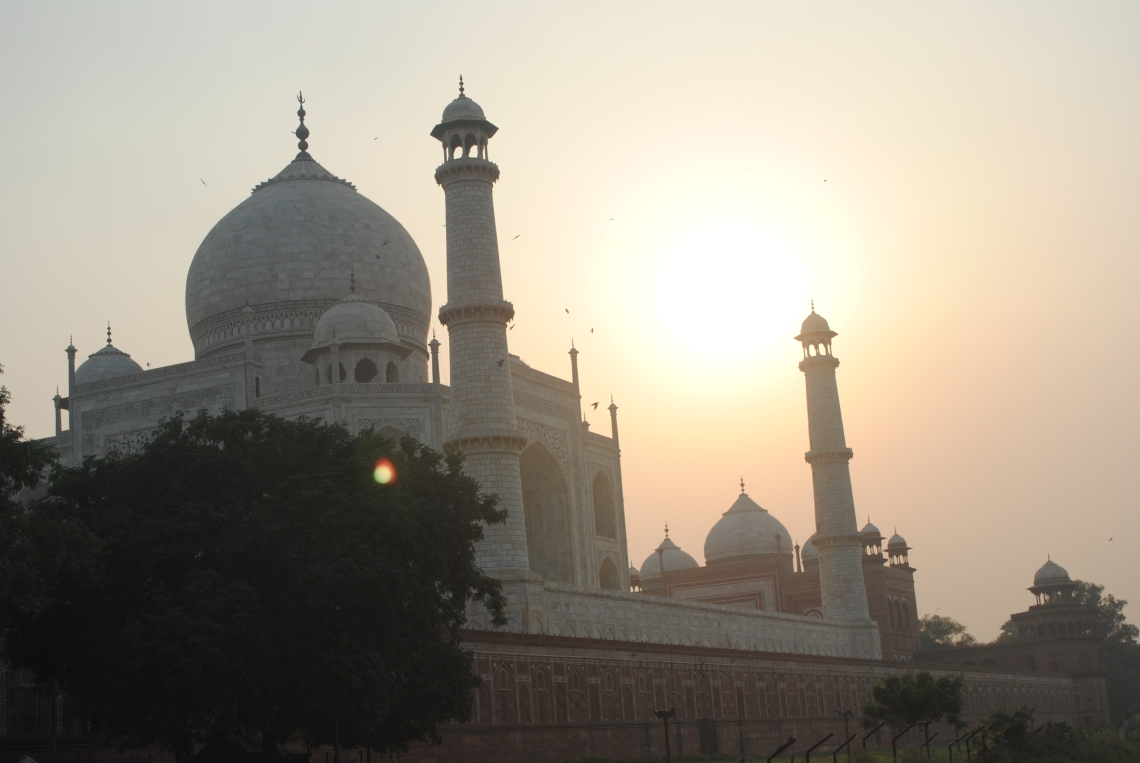 Agra makes every effort to ensure its guests are able to enjoy the beauty of the Taj Mahal from as many viewpoints as possible. Thanks to this, we ate all of our meals on rooftop restaurants with birds-eye views of the Taj Mahal. This also allowed for great people and animal watching. We cheered on a neighborhood cricket game from one rooftop, saw hectic tuk-tuk haggling from another, and watched water buffalo troop home from another. Once we were back on street level, I even briefly shepherded a herd of water buffalo down the street before jumping aside to pacify huffing threats of being stuck with a horn. Since the human population is much less dense in Agra compared to other major cities in India, the domestic and wild animals have a lot more room to roam. In noticing this, we took pause to appreciate the going-ons of our furry friends. Pigs walked the streets freely and even had their own expansive rubbish garden where they entertained the occasional dog or water buffalo. Monkeys strutted store to store, donkeys stood painted and waiting for their owners, goats rested in the shade, parrots flitted across buildings, and cows lazed about the streets. 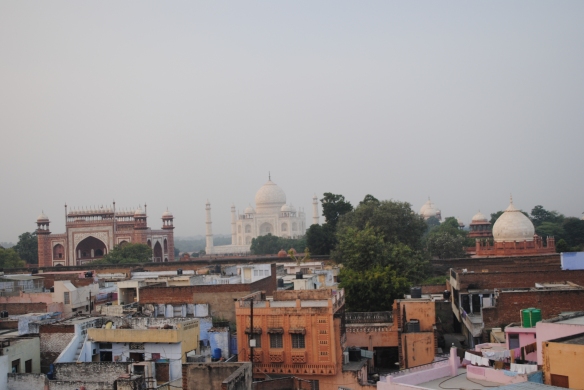 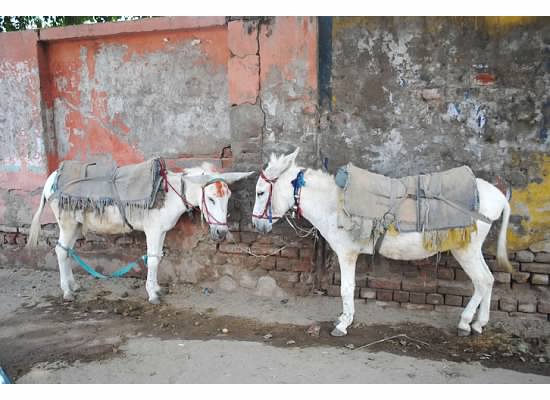 Our next train journey brought us to Varanasi. Unfortunately, I got very sick and was admitted to the hospital with Dengue Fever. I had been part of a Dengue Fever epidemic in Delhi, but since you don’t feel any symptoms for about one week after being bitten by an infected mosquito, we did not know I had Dengue until Varanasi. The nine days I spent in bed with Dengue Fever were some of the longest of my life; but thanks to the love, care, and diligence of those around me (and those made near by phone calls and e-mails!), I recovered just fine! After a much pampered recovery stay in the finest hotel in Varanasi, I regained my strength and was able to start exploring the city that Mark Twain said is, “older than history, older than tradition, older even than legend, and looks twice as old as all of them put together”.

Venturing out from our new, budget hotel in the old city, we walked each day through the maze of back streets and watched as men hammered hunks of coal which they would later use to fuel their cooking fires. Out on the main streets, people put the coals inside their metal irons and charged a small fee to iron clothes under a sheet of shade on the side of the road. Others sat on top of small palettes lifted on four wooden wheels and sold cartfulls of bananas or garlic or tomatoes which surrounded them in a field of produce. Young men twirled ten foot tall poles decorated with hundreds of wind-powered toys for sale. Bangle shops glinted in the sunlight, luring me inside to ogle after the endless rows of glittered bracelets in varying colors and gem sizes. Lassi shops selling sour yogurt flavored with fresh fruit, crushed by mortar and pestle, and topped with saffron, rosewater, and sliced pistachios kept us fueled. And up on the flat rooftops, children held kite wars battling to catch the biggest surge of wind and catapult their kite to the highest clouds in the sky. 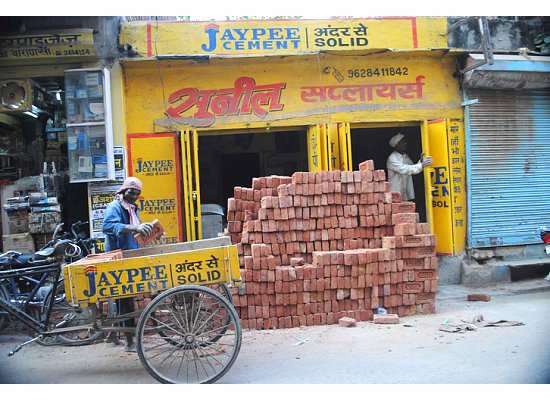 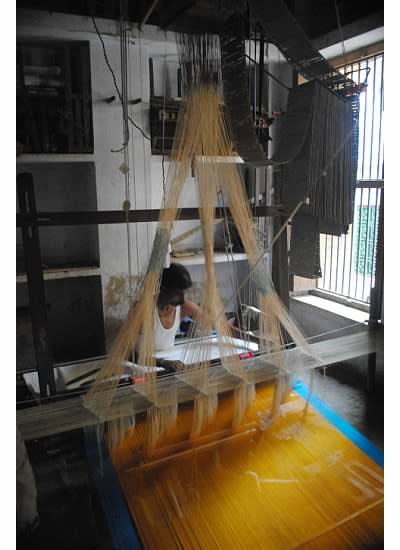 The city has an extremely rich history, and Hindus consider it one of the holiest places in the world.The god Shiva is thought to have founded the city and people began populating the banks along the Ganges river in the 11th century BC, making it one of the oldest continually inhabited cities in the world. The Ganges, the longest and most sacred river in India which runs the length of the Varanasi, is said to take away one’s impurities, accepting and forgiving all people that come to her waters. Due to this deeply imbedded religious belief, people use the Ganges for a myriad of daily activities. Wandering the ghats (stone slab steps) of the Ganges, we saw people bathing, washing clothes, cooling off their water buffalo, and even drinking the water. Millions of Hindus from other parts of India and the world make the pilgrimage to Varanasi because of this belief that the Ganges washes away one’s sins. It is also believed that if in death, you are cremated on the ghats of the Ganges and placed in the river, you will reach Moksha and be released from the cycle of reincarnation. This sense of peace and beauty in death can be felt throughout the city. Every few hours we would hear the raucous rhythmic shouting which preceded funeral processions, and just moments after hearing the procession, we would see the colorfully silk-draped body of the deceased hoisted above the crowd on its path down to Mother Ganga and Moksha.

Intrigued by the power and respect given to the Ganges, Lee and I took a boat out on the water. Looking back to the city from our rowboat, temples and statues and god-painted water towers competed for our attention. Dusk approached and we went further downstream to the burning ghats where cremations take place. Three fires burned on three different tiers of steps, each tier correlating with the caste of the deceased. Cremations take place 24 hours a day, 7 days a week, and the resulting soot paints the surrounding buildings jet black. We sat silently in our rowboat, listening to our local guide explain their tradition of cremation while 10 feet away bodies were being burned in front of our eyes, and more were lining up, being immersed in the Ganges, and waiting their time to turn to ashes. It was solemn and heavy, and yet you knew this was truly what the people wanted, their ultimate freedom and release. Paddling backwards, we left the burning ghat and made our way up the river to one of the larger worshiping ghats. Just as we arrived, the nightly ceremony for Mother Ganga was beginning. The elaborate ritual consists of Brahmin working in tandem as they swirl incense, fire, and bundled hair to the sounds of traditional music and crowd-generated ringing bells. Amongst the music and intense spirituality, we lit our own aarti offerings of a small purified butter candle surrounded by brilliant marigolds in a waxed leaf bowl, and released them into the Ganges – watching them float through the black water and join the thousands of other lights of reverence on the sacred river. 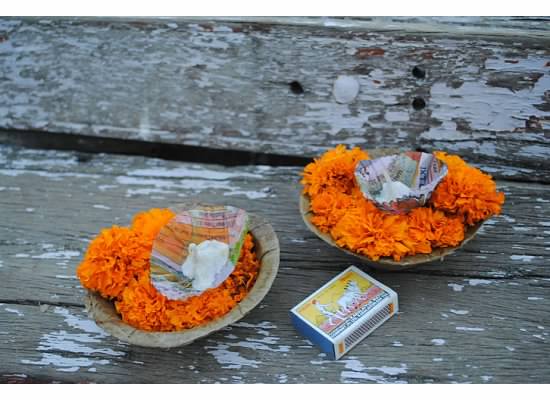